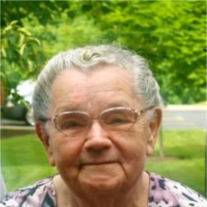 Wilma Louise Albright, age 84, of Shoals, passed away on Monday, January 11, 2016 at her home. Born on February 14, 1931 in Martin County, Indiana, she was the daughter of the late Wayne and Beulah (Abel) Montgomery. She married Robert D. Albright on May 14, 1947 and he preceded her in death. Wilma attended Shoals High School and currently served as President of Country Pines Inc., their family print shop where she worked until the last two months. Surviving are 3 daughters, Esther Dennis, Eloise Haycox, Vicki and her husband Terry Tichenor all of Shoals. 3 sons, Melvin and wife Markeeta Albright, Wesley and wife Vonda Albright, Warren and wife Kimberly Albright, all of Shoals. 17 grandchildren, 24 great-grandchildren. Also surviving are 1 sister, Eileen and husband Wayne Sanders of Salem, Ohio, and 4 brothers, Kenneth Montgomery, Robert and wife Ruth Montgomery, Stanley and wife Carla Montgomery, and Marvin Montgomery of Jasper. She is preceded in death by her parents, husband, two brothers, Danny and Donnie Montgomery, two sons-in-law, Verlin Dennis and Donald Haycox, and one great-grandson Brandon Albright. Visitation will be from 5:00 p.m. until 8:00 p.m. on Wednesday, January 13, 2016 at the Queen-Lee Funeral Home in Shoals. The funeral will be at 2: 30 p.m. on Thursday at the funeral home. Burial will follow in Spring Hill Cemetery. Pastor John Ziegler will officiate the service. Memorial contributions may be made to God’s Bible School and College, 1810 Young Street, Cincinnati, Ohio 45202 or online at www.gbs.edu/giving/givenow/ Condolences may be made to the family at www.queenlee.com
To order memorial trees or send flowers to the family in memory of Wilma Louise Albright, please visit our flower store.