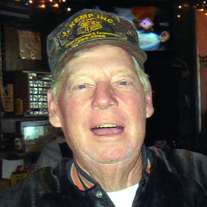 William L. Tinkle age 80, formerly of Shoals, passed away on Tuesday July 4, 2017 at 8:20pm at the Jasper Memorial Hospital. He lived at The Timbers in Jasper for three years. He was born on May 5, 1937 in Shoals, Indiana to David and Ruth (Lindley) Tinkle. He attended Shoals Schools. He was a logger and he enjoyed fishing. He is survived by two sons; Roger Tinkle of Loogootee and Tony Tinkle of Shoals, two granddaughters and a grandson; Jason Tinkle of Loogootee, brothers; Tennis Tinkle of Loogootee, Harold Dean Tinkle of Crystal, sisters; Yvonne Stone of Shoals, Linda Courtright of Washington, Brenda Tedrow of Loogootee, Pam Blair of Washington and Lana Bush of Linton. Several nieces, nephews, great nieces and great nephews also survive. He is preceded in death by his parents, children; Kathy tinkle and Michael Tinkle, brothers; Jack Tinkle, Daniel Tinkle and Carl Tinkle, sisters; Clara Wininger, Carolyn Sue Tinkle and Janet Ragains. Funeral services will be held on Friday July 7, 2017 at 2:00pm at the Queen-Lee Chapel of the Thorne-George Family Funeral Homes in Shoals with burial in the Springhill Cemetery. Bro. Marvin Lagle will officiate. Visitation will be on Friday from 11:00am until the time of service.
To order memorial trees or send flowers to the family in memory of William L Tinkle, please visit our flower store.