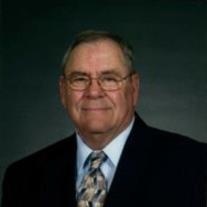 William Clement Farrell, 83, of Loogootee, passed away on Friday, January 2, 2015 at Loogootee Nursing Center. Born May 23, 1931 in Loogootee, Indiana, he was the son of John Vernon and Alberta (Padgett) Farrell. He married Janet Harder on November 28, 1957; and she preceded him in death on January 18, 1998. He later married Eleanor Arvin; and she preceded him in death in 2012. He was a graduate of Loogootee High School, Class of 1949. He retired from Crane Naval Base in the 1990’s. He was a member of the American Legion Post #61. Mr. Farrell was a member of St. John’s Catholic Church of Loogootee. He was a veteran of the United States Air Force where he served in Korea. Surviving are three daughters, Joni and Rick Parks, of West Bend, WI, Judith Lynch, of French Lick, and Lisa and Kenny Elliott, of Jasper; one son, Jeffery A. Farrell, of Shoals; seven grandchildren, Seth Dickey, Josh Lynch, Kaci Lynch, Matt Parks, Kyle Parks, Nick Elliott, and Ben Elliott; three great-grandchildren, Colton, Elijah, and Arianna Dickey; three brothers, Jim Farrell, Indianapolis, Al Farrell, Santa Claus, IN, and Larry Farrell, Speedway; and two sisters, Barbara Link, Brownsburg, and Martha Love, Loogootee. Mass of Christian Burial will be on Tuesday, January 6, 2015 at 10:00 A.M. at St. John’s Catholic Church in Loogootee, with Father Ken Walker officiating. Burial will be in Spring Hill Cemetery. Friends may call on Monday, 4-8 P.M. at Queen-Lee Funeral home, Shoals.
To order memorial trees or send flowers to the family in memory of William Clement Farrell, please visit our flower store.