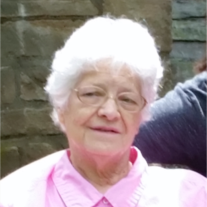 Virginia D. (Holt) Earl, 82, of Huron, passed away on January 29, 2016 at 2:35 a.m. at the Garden Villa in Bedford. She was born on August 23, 1933 in Martin County, Indiana to Eddie and Louise (Johnson) Holt. Virginia married Alfred Lee Earl on January 10, 1953 in Martin County, Indiana and he preceded her in death on May 28, 2010. Virginia was a member of the Kingdom Hall of Jehovah’s Witness in Mitchell. She was a homemaker and enjoyed fishing, hunting, cooking and doting on her grandchildren. She is survived by her children: Nina Woody of Huron; David Earl of Huron; Teresa, and husband, Dennis King, of Huron; Jerrica, and husband, Jason Kutche of Huron; grandchildren; Lisa (Cody) Moore, Ronnie Jones Jr., Tina (Mike) Triplett, Jennifer Whalen, Kayla (Mark) Jones, and Daysen Alfred Lee Kutche; 11 great grandchildren and 9 great great-grandchildren; brother, Wayne(Sue)Holt; sisters, Annabelle Blake and Hazel Joann Hall. She is preceded in death by her parents; husband; brother, Robert E. Holt; sister, Bernice Beacher, and 2 great-great grandchildren Ciara Nicole Moore West and Braxton Boyer. Visitation will be from 4:00 – 8:00 p.m. on Monday, February 1, 2016 at the Queen-Lee Funeral Home in Shoals. Funeral services will be on Tuesday, February 2, at 2:00 p.m. at the funeral home. Burial will follow in the Clark Cemetery in Huron. Officiating will be Mark Morrow. Condolences may be made on-line to the family at www.queenlee.com
To order memorial trees or send flowers to the family in memory of Virginia D. (Holt) Earl, please visit our flower store.