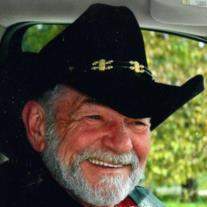 Tracy Lee Hillenburg, 70, of Shoals passed away at 7:40 a.m. on Wednesday, January 21, 2015 at his home in Shoals. He was born on August 16, 1944 in Lawrence County, Indiana to Earl and Rhea Dawn (Tims) Hillenburg. Tracy enjoyed country music and singing. He loved to travel and made several trips to Texas and Alaska. He was a retired self-employed contractor. He was a veteran of the United States Army. Survivors include his wife Wanda Sue (Hovis) Hillenburg of Shoals One sister, Kelly Reed of Mitchell Daughters, Tina Marie and Joe Nichols of Bloomfield; and Athena Ann and Wade Caudill of Bedford. Sons, Triston and Tammy Baker of Silverville; and Tracy and Susan Hillenburg of Oolitic Two step-sons, William R Hamblin and Steve R. Hamblin of Shoals 14 grandchildren and 10 great-grandchildren. He is preceded in death by his parents Earl and Rhea Dawn Hillenburg, brother Kevin Hillenburg, and two sisters, Peggy Bundy and Marsha Horton. Visitation will be from 11:00 a.m. until the hour of service at 1:00 p.m. on Saturday, January 24, 2015 at the Hickory Ridge Church. Burial will follow in the church cemetery. Condolences may be made online to the family at www.queenlee.com
To order memorial trees or send flowers to the family in memory of Tracy Lee Hillenburg, please visit our flower store.