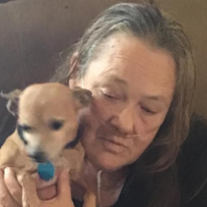 Susan Marie Tolbert age 60, of Loogootee, passed away February 11, 2019 at St. Vincent Hospital in Evansville. She was born May 13, 1958 in Tallahassee, Florida to Robert and Marion (Cumberlidge) Clark. She married Gregory Tolbert in 1976 in Loogootee. Susan was a homemaker, a member of the Loogootee Church of Christ and a member of the Daughters of the American Legion in Shoals. Surviving are, her husband; three daughters, Tonya (Michael) Jones of Loogootee, Marion Anderson of Fort Wayne, April (Josh) Payne of Loogootee; eight grandchildren, Ariel (David) Derr, Jonathon (Kayla) Jones, Taylor Anderson, Jacob Anderson, Matthew Anderson, Nicole Anderson, Seth Wisner, Lance Wisner; two brothers, Charles Clark of Florida and Tom Clark of Florida; two sisters, Barbara Smith of Florida and Karen Boyd of Florida. She is preceded in death by her parents and two brothers, William Clark and Robert Clark. Funeral services will be held 1:00 p.m. Saturday at the Queen-Lee Chapel in Shoals with burial at a later date. Visitation will be 11:00 a.m. Saturday until the time of service at the funeral home. Memorial donations may be made to the Queen-Lee Chapel. The arrangements have been entrusted to the Queen-Lee Chapel of the Thorne-George Family Funeral Homes.
To order memorial trees or send flowers to the family in memory of Susan Marie Tolbert, please visit our flower store.