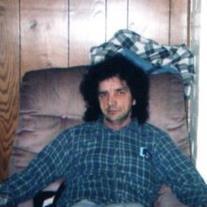 Stanley L. Salmon, 64, of Washington, Indiana, formerly of Shoals, Indiana passed away unexpectedly at St. Mary’s Medical Center in Evansville on June 25, 2015 at 12:23 p.m. Born in Washington, Indiana on January 9, 1951 he was the son of the late James Webster and Thelma Ruth (Sheetz) Salmon. He married Donna F. Jones in Martin County on October 6, 1982 in Martin County, Indiana. He was a veteran of the United States Army. He was employed in the sawmill industry most of his life and recently became disabled. He is survived by his wife, Donna Salmon of Washington Daughter, Theresa Lewis of Washington Sons, Steven Salmon and Terry Salmon both of Washington 3 grandsons, Brandon and Kayden Lewis and Dante Salmon Three sisters, Beverly Sellers and husband Wendall, of Mitchell; Cindy Doggett of Bedford; Becky Ramsey of Shoals; two brothers, Dallas Salmon and wife Patty, of Bloomington and Jeff Salmon of Shoals. Preceded in death by his parents, 2 grandsons, Xavier Salmon and Syfur Salmon; 3 brothers Jimmy Salmon, Charlie Salmon and Leslie Salmon; and 2 sisters Brenda Hill and Nioma Hunt. Visitation will be from 11:00 a.m. until the hour of service at 1:00 p.m. on Monday, June 29, 2015 at the Queen-Lee Funeral Home in Shoals. Burial will follow in Spring Hill Cemetery. American Legion Post #61 will accord military graveside rites. On-line condolences may be made to the family at www.queenlee.com
To order memorial trees or send flowers to the family in memory of Stanley L Salmon, please visit our flower store.