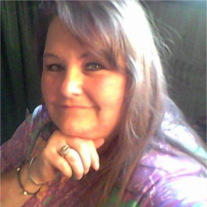 Shannon Elaine Tharp, 54 years old, the beloved cook at Velma’s Diner in Shoals, died Friday evening, August 2, 2019, at the St. Vincent Hospital in Evansville. Shannon, a longtime resident of Shoals, was the daughter of Velma Lou (Bough) and James Darrell Tharp. She was born on October 25, 1964 in Yuma, Arizona. Shannon was a graduate of Shoals High School. She had also been employed at Loogootee Textiles and the Nu-Tap Tavern in Shoals as well as Velma’s Diner. She was of Christian faith. Shannon is survived by a sister, Debbie Montgomery of Shoals; and a brother, Brian and wife Mandy Tharp of Shoals. She is also survived by a special cousin, Carla Rincker of Shoals; as well as, two nieces and four nephews. She was preceded in death by her parents and a brother, Jason Tharp. There will be a visitation for Shannon held at the Thorne-George Family Funeral Homes Inc., Queen-Lee Chapel in Shoals on Thursday, August 8, from 4:00 till 8:00 PM. The funeral will be Friday, August 9 at 1:00 PM at the funeral home. Burial will be at Spring Hill Cemetery. Memorial contributions may be made to the Tharp Family at the Queen-Lee Chapel.
To order memorial trees or send flowers to the family in memory of Shannon Elaine Tharp, please visit our flower store.