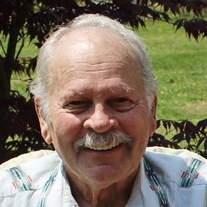 Ronald G. Miller age 76 of Shoals, passed away at his residence on August 25, 2019. He was born July 5, 1943 in Velpen, to Ovle Gene and Alice (Young) Miller. He married Rita Hulsey on May 10, 1975 and she survives. He served as a Naval Aviator during the Vietnam War, was a retired heavy equipment operator and attended The River Church. Ronald is survived by his wife, his mother, Alice Miller of Newburgh; three sons, T.J. Miller of Shoals, Kyle (Kati) Miller of Glenrock, Wyoming, Tyler (Kelsey) of Shoals; three daughters, Pamela Miller of Wewahitchka, Florida, Robin List of Indianapolis and Jessica (Denny) Stanton of Sellersburg. Twelve grandchildren, five great-grandchildren, one brother Marc Miller of Newburgh one sister, Tracy Vosler of Columbus, Ohio and a special son, BJ (Ruth) Whaley of Shoals also survive. He is preceded in death by his father; a son, Heath Kalb; a daughter, Sandy Kalb; two grandsons, Logan Heath Whaley and Kenneth Michael Sprecher. A memorial service will be held at 7:00 PM Friday at the Queen-Lee Chapel in Shoals with Pastor Ed Farhar officiating. Burial will be in the Walnut Grove Cemetery in Velpen on September 7, 2019. Visitation will be 2:00 PM until the time of service on Friday. The Queen-Lee Chapel of the Thorne-George Family Funeral Homes is in charge of the arrangements.
To order memorial trees or send flowers to the family in memory of Ronald G. Miller, please visit our flower store.