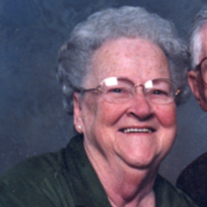 Roberta Joyce (Hawkins) Ervin, 91, of Shoals, Indiana passed away on Saturday, February 20, 2016 Memorial Hospital & Healthcare Center in Jasper. Born on June 2, 1924 in Indianapolis, Indiana to the late Beatrice Hawkins, she was raised by her grandparents Phillip and Anna Hawkins in Natchez. She married George Charles Ervin Sr on June 26, 1940 and they were married 69 years at his passing in 2009. Joyce declared her main occupation as homemaker and “raising kids”, however, she held several jobs outside of the home, including, Tarzan’s in Orleans, Loogootee Textile, Crane Depot, and Tredway’s Grocery in Shoals. She was baptized at the age of 13 in the Lost River, and was a member of the Natchez United Methodist Church. Joyce was a 68- year member of the American Legion Ladies Auxiliary, a member of both the Jug Rox Grandmothers Club, and the order of Rebekah’s. She also had a special fondness for collecting pigs. She is survived by her daughters, Carole S. Tow of Shoals; Georgia Ann Sorrells of Shoals; Karen, and her husband, Richard Wilson of Washington; sons, Jerold Eugene Ervin of Shoals; John Phillip, and his wife, Astrid Ervin of Shoals; 17 grandchildren; 29 great-grandchildren; and 7 great-great grandchildren. She is also preceded in death by a daughter, Cozetta Marie Tredway in 2012, a son George Charles Ervin Jr at age 13 in 1958, and 2 grandsons. Visitation will be from 11:00 a.m. until the hour of service at 2:00 p.m. on Saturday, February 27, 2016, at the Queen-Lee Funeral Home in Shoals. In keeping with her wishes, following her services, Joyce will be cremated and laid to rest at a later date in the Hawkins Cemetery. Condolences may be made on-line to the family at www.queenlee.com
To order memorial trees or send flowers to the family in memory of Roberta Joyce Ervin, please visit our flower store.