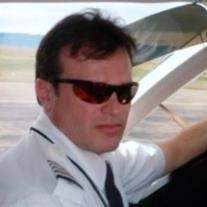 Reese Lane Boyd, age 46, of Shoals, Indiana, passed away on January 17, 2015 at 1:20 p.m. at the Norton Audubon Hospital in Louisville, Kentucky. Born on September 10, 1968 in Daviess County Indiana, he was the son of Lloyd and Alice (Sorrells) Boyd. Reese graduated from Shoals High School Class of 1987 and Vincennes University with a degree in Aviation. He was a commercial pilot, and most recently worked as an air ambulance pilot for Air-Med Corporation in Alabama. He was a member of Shoals St. Mary of The Immaculate Conception Catholic Church. He is survived by his mother, Allie Boyd of Shoals Three sisters, Vanessa Dorsett of Mitchell; Sonja Boyd of Shoals, and Stephanie Houchins of Shoals One brother, Jeffrey Boyd of Cleburne, Texas 18 nieces and nephews and 25 great nieces and nephews. Many lifelong friends and neighbors. He is preceded in death by his father, Lloyd “Moose” Boyd on April 5, 2008; his maternal grandparents Lawrence and Maude Sorrells; and paternal grandparents, Benjamin and Vada Boyd. Visitation will be from 4:00 – 8:00 p.m. on Wednesday, January 21, 2015 at the Queen-Lee Funeral Home in Shoals. A Rosary will be prayed at 5:00 p.m. A Mass of Christian Burial will be at 11:00 a.m. on Thursday at St. Mary of The Immaculate Conception Catholic in Shoals. The Rev. J. Kenneth Walker will celebrate the mass. Burial will follow in Spring Hill Cemetery in Shoals. Condolences may be made on line to the family at www.queenlee.com
To order memorial trees or send flowers to the family in memory of Reese Lane Boyd, please visit our flower store.