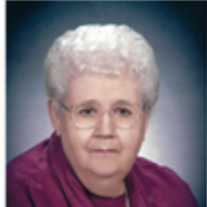 Phyllis Ann (Crane) Wildman, age 87, of Shoals passed away peacefully at her home Tuesday morning, July 3, 2018. She was born on February 8, 1931 in Martin County to William Daniel Crane and Rhoda Mae (Jewell) Crane. She married the love of her life Andrew Jackson Wildman Jr. on August 15, 1945 in Shoals. There was much rejoicing on this day as it was the end of World War II with victory over Japan, with Harry S. Truman being president and dropping the atomic bomb on Hiroshima a short time before. Together they built a wonderful life. Phyllis was a homemaker, a wonderful cook, and always kept a garden, sharing much with family, friends and neighbors. In her younger life she was a nursing assistant with her sister in Indianapolis. She was a member of the Order of Eastern Star serving twice as Worthy Matron and holding the Star Point of Esther for many years until her age and disabilities prevented her from doing so. She was also a member of the Extension Homemakers Club, Jug Rox Grandmothers Club and Hillcrest Christian Church. Survivors include one son Anthony Lowell (Peggy) Wildman of Shoals; one daughter, Esther Elaine (Eugene) Cottingham of Shoals; two grandchildren, Lorie (Mike Curry) Canada of Bloomington and Andrew (Christa) Cottingham of Indianapolis; five great-grandchildren, Jordan (Jennifer) Canada of Bloomington, Jacob Canada of Bloomington, James Curry of Bloomington, Kylie Cottingham of Indianapolis and Logan Cottingham of Indianapolis and three great-great grandchildren Alex Hickman, Garrett Hickman and Conner Hickman all of Bloomington. She also leaves a number of nieces and nephews as well as many great, great-great, great-great-great nieces and nephews. She was preceded in death by her husband, parents and four siblings, Johnny Crane, Marie (Crane) Franklin, Leon (in infancy) and Lowell Crane. She was the last of her family. Funeral services will be held at 2:00 p.m. Sunday at the Queen-Lee Chapel in Shoals with Brother Charlie Scott officiating. Burial will be in the Spring Hill Cemetery. Visitation will be on Sunday from 11:00 am until the service. Pallbearers will be, Andrew Cottingham, Lorie Canada, Jordan Canada, Jacob Canada, Victor William Neideffer and David Armstrong. The Queen-Lee Chapel of the Thorne-George Family Funeral Home is in charge of the arrangements.
To order memorial trees or send flowers to the family in memory of Phyllis Ann Wildman, please visit our flower store.