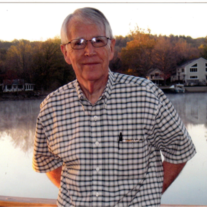 Phillip Claude Quinn, 81, of Mitchell, Indiana passed away at the IU Health Hospice House on Friday, April 22, 2016 at 1:45 a.m. One of ten children, he was born on March 20, 1935 to the late Charles “Cleo” and Lillian Irene (Jones) Quinn. He married Marietta Lewis and she preceded him in death in 2006. Mr. Quinn owned grocery stores in Arizona for 30 years. Prior to that he worked at Kraft Foods in Indianapolis and Chicago. Mr. Quinn also served in the Indiana National Guard. He was involved with many charitable organizations and food banks. He greatly enjoyed yearly family outings in the Smokey Mountains. He loved his family and extended family dearly, and all who met him loved him. He is survived by his family, including, 1 daughter Kathy Quinn, and her husband, Tim Tangeman of Glendale, Arizona; 1 son, Ryan, and his wife, Jill Quinn of Largo, Florida; 2 granddaughters Angela Lewis of Jamestown, Ohio; Noelle New of Rockford, Illinois; and 1 grandson, Travis Byrd of Phoenix, Arizona; 6 great-grandchildren; 1 sister, Irene Kyger of Shoals; 5 brothers, Jack Quinn and Gerald Quinn both of Ft. Wayne, Indiana; Carl Quinn of Mitchell, Indiana; and Terry Quinn and Edgar Quinn both of Shoals, Indiana. He is preceded in death by his parents, wife Marietta, 1 sister Jeanette Berry, and 2 brothers, Cecil and Eugene Quinn. Visitation will be from 4-8:00 p.m. on Friday, April 29, 2016 at the Queen-Lee Funeral Home in Shoals. A funeral service will be conducted on Saturday, April 30, 2016 at 11:00 a.m. at the funeral home. Burial will be made in the Emmons Ridge Cemetery.
To order memorial trees or send flowers to the family in memory of Phillip Claude Quinn, please visit our flower store.