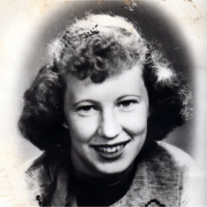 Peggy Ann Carter, 81, of Cale, passed away on Friday, May 6, 2016 at 12:40 p.m. at The Timbers of Jasper. Born in Evansville, Indiana on October 21, 1934 in Evansville, Indiana she was the daughter of the late Roscoe and Catherine Baugh. Peggy graduated from Evansville Bosse High School in 1952 and retired from National Gypsum. She was of the Baptist faith. She raised five children, James A. Carter of Shoals; Frances Ann Summers of Houston, Texas; Joann Sue Seitz of Jasper; Rusty Lee Kelly of Shoals; and Catherine Smith of Celestine. She is also survived by several grandchildren and great-grandchildren, and brother Richard Baugh of Shoals. She is preceded in death by a brother Larry Baugh. Visitation will be from 11:00 a.m. until the hour of service at 1:00 p.m. on Tuesday, May 10, 2016 at the Queen-Lee Funeral Home in Shoals. Burial will be made in Trinity Springs Cemetery. Condolences may be made to the family at www.queenlee.com
To order memorial trees or send flowers to the family in memory of Peggy Ann Carter, please visit our flower store.