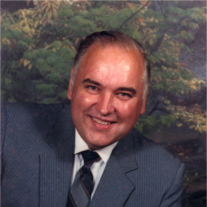 Rev. Paul Dean Keys, age 76, of Shoals, Indiana went to be with his Lord and Savior at 11:00 a.m. on Tuesday, January 19, 2016 at Memorial Hospital & Healthcare Center in Jasper. Born on August 27, 1939 in Jasper County, Illinois he was the son of Lorance and Bertha (Walters) Keys. He married Norma Perisho on June 5th, 1959 in Casey, Illinois. Paul graduated from Oblong High School and furthered his education at Frankfort Pilgrim College in Frankfort, Indiana. He and his wife Norma served Wesleyan congregations throughout Indiana, including pastorates in Wheatland, Medora, Linton, and the Crystal Community Church. He currently attended the Weisbach Community Church in Shoals. Survivors include: Mother, Bertha Keys of Oblong, Illinois Wife, Norma Keys of Shoals Two daughters, Pauletta and husband Vaughn Montgomery of Shoals; Brenda and husband Tracy Moore of Loogootee; son Bruce and wife Brenda Keys of Wheatland; eight grandchildren, Denise Sanders, Darrell Montgomery, Jeannette Estes, Jennifer Montgomery, Jeffrey Keys, Alicia Moore, James Moore and Damaris Moore; 3 great-grandchildren; one sister, Nina Sutton of Indianapolis; brothers, Roy Keys and Chester Keys both of Oblong, Illinois; Rodger Keys of Peotone Illinois; James Keys and Estell Keys both of Willow Hill, Illinois; and numerous nieces and nephews. He is preceded in death by his father and a brother Charles Keys in infancy. Visitation will be from 5:00-7:00 p.m. on Friday, January 22, 2016 at the Queen-Lee Funeral Home in Shoals and the service will be at 2:00 p.m. on Saturday, January 23, 2016 at the funeral home. Burial will follow in Spring Hill Cemetery. Condolences may be made on-line to the family at www.queenlee.com
To order memorial trees or send flowers to the family in memory of Paul Dean Keys, please visit our flower store.