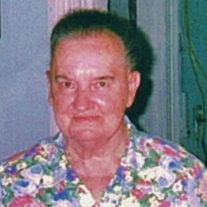 Nellie (York) Shartzer age 78, of Loogootee, passed away at 11:45 AM Friday, October 19, 2018 at the Loogootee Nursing Center. She was born February 12, 1940 in Huron to Ovie and Ida Frances (Johnson) York. She attended Huron Schools, was employed by the French Lick Sheridan Hotel in the 1960’s and baby sit several local children. She enjoyed working with her flowers and garden. She is survived by her companion of twenty-seven years Tennis Tinkle, a son, Jerry L. Terry of Orleans; one sister, Mary Tinkle of West Baden; one brother, Paul “Smokey” York of Loogootee; two aunts, Barbara Thomas and Ruth Taylor. She is preceded in death by her parents, husband, Charles Shartzer; two children, Delores Terry and Danny Ray Brown; and sister, Annebell York. Funeral services will be 1:00 PM Wednesday at the Queen-Lee Chapel in Shoals with Rev. John Simmons officiating. Burial will be in the Clarks-Ferry Cemetery. Visitation will be 11:00 AM until the time of service on Wednesday. The Queen-Lee Chapel of the Thorne-George Family Funeral Homes is in charge of the arrangements.
To order memorial trees or send flowers to the family in memory of Nellie (York) Shartzer, please visit our flower store.