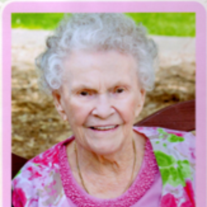 Mary Louise Sargent, 102, of Bloomington, formerly of Shoals, passed away at 5:45 p.m. on May 30, 2016 at the Garden Villa in Bloomington. Born on June 2, 1913 in Shoals, Indiana she was the daughter of James Garfield and Fanny Jane (Neighbors) Blackwell. She married Ernest A. Sargent and he preceded her in death on January 13, 1973. She is survived by two daughters, Susan, and her husband, Steve Osborne of Bloomington; Sally J. and her husband, John Gibson of Pensacola, Florida; 5 grandchildren; 11 great-grandchildren; and one sister June Warner of Loogootee. She is preceded in death by her parents, husband, 3 sisters and 1 brother in infancy. She was a homemaker and of the Catholic faith. Graveside services were held on Wednesday, June 1, 2016 at 3:00 p.m. at the Spring Hill Cemetery in Shoals. The Very Rev. J. Kenneth Walker officiated the service.
To order memorial trees or send flowers to the family in memory of Mary Louise Sargent, please visit our flower store.