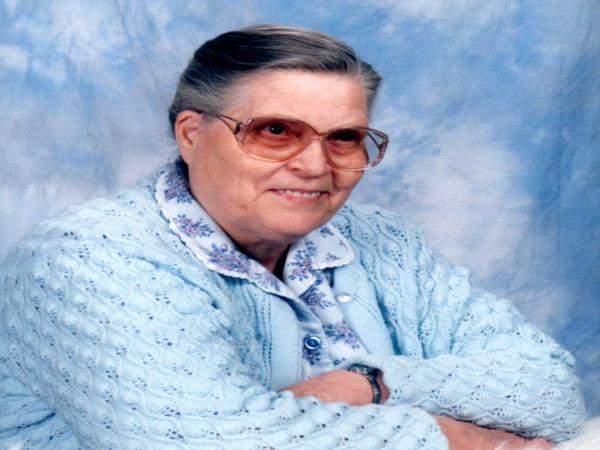 Mary Bernice Bauernfiend, 93, of Shoals, Indiana joined her loving husband and savior at 11:25 p.m. on May 12, 2015 at the Memorial Hospital & Healthcare Center in Jasper. She was born on March 26, 1922 in Martin County, Indiana to Willard and Millie (Henry) Hovis. She married Leo Bauernfiend on October 27, 1943 and he preceded her in death on January 19, 1982. Bernice was a homemaker and a loving wife, mother and grandmother. She graduated with the Shoals High School Class of 1941 and was a faithful member of the Shoals Holiness Church. Bernice had a special gift of hospitality. She loved to entertain others in her home and greatly enjoyed cooking for them. Sunday’s often found her cooking dinner for any amount of friends her children would invite home from church. She was a practical joker and loved playing games, howling with laughter when she would lay down a draw four card on someone. In later years, Thursday night family night became a highlight to her week. Her children and grandchildren will have many memories of a devoted and loving mother and grandmother. She is survived by two daughters Mary Bauernfiend of Lake Jackson, TX; Rosie Bauernfiend and fiancé Rick Lippert of Loogootee; three sons, Dennis and Mary Lou Bauernfiend of Monrovia, Indiana; Terry and Candi Bauernfiend of Terre Haute; Dwight and Deanna Bauernfiend of Shoals; 15 grandchildren, 31 great grandchildren and 5 great-great grandchildren; sister-in-law, Rose Bauernfiend of Shoals and brother-in-law John Riddle of Albany, KY. She is preceded in death by her parents, siblings Irene Riddle, Blanche Brett, Earl Hovis, one brother and one sister in infancy, and 2 great-grandchildren in infancy. Visitation will be Friday, May 15, 2015 from 4-8:00 p.m. at the Queen-Lee Funeral Home in Shoals. A funeral service will be held on Saturday, May 16, 2015 at 1:00 p.m. at the funeral home. Burial will follow in Spring Hill Cemetery. Preferred memorials are to the Shoals Holiness Church. Envelopes will be available at the funeral home.
To order memorial trees or send flowers to the family in memory of Mary Bernice Bauernfiend, please visit our flower store.