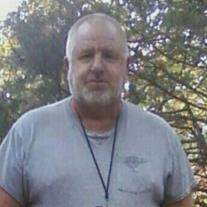 Lonnie L. Salmon, 58, of Shoals, passed away unexpectedly at 12:15 a.m. at the Daviess Community Hospital in Washington. Born on September 26, 1957 in Martin County, Indiana he was the son of the late Robert and Fern (Lundy) Salmon. He married Bobbi Sheetz on January 19, 1980 in Williams, Indiana. Lonnie graduated from Shoals High School in 1975. He was previously employed by Cal Car Quarries in Paoli and was soon to retire from the Indiana Department of Transportation. He greatly enjoyed spending time with his grandchildren, blacksmithing, hunting, cutting wood, and attending tractor pulls. Lonnie was a member of the Indiana Blacksmithing Association and Bunkham Valley Blacksmith Association. He will be deeply and forever missed by his family, including, wife Bobbi of Shoals; daughters, Traci, and her husband, Chad Grafton of Loogootee; and Kathy Royston of Shoals. Four grandchildren, Tristan and Noah Knight, Emri and Colin Grafton; brothers, Jerry Salmon of Loogootee and Roy Salmon of Shoals; sister-in-law, Sandy Salmon of Loogootee; numerous nieces, nephews and friends. Preceded in death by his parents, and a brother Larry Salmon Sr. Visitation will be from 4:00 – 8:00 p.m. on Monday, November 2, 2015 at the Queen-Lee Funeral Home in Shoals and the funeral service will be at 11:00 a.m. on Tuesday at the funeral home. Burial will follow in Pleasant Valley Cemetery.
To order memorial trees or send flowers to the family in memory of Lonnie L. Salmon, please visit our flower store.