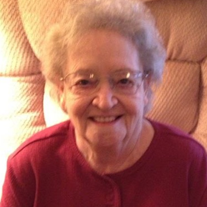 Linda Sue Shaw, 78, of Radcliff, Kentucky, passed away at her residence on January 6, 2018. She was born March 13, 1939 in Shoals, Indiana to Elmer and Virginia (Shipman) Fahr. She married Donald L. Shaw on May 27, 1956 in Shoals and he preceded her in death on September 18, 2014. She graduated from Shoals High School, was a homemaker, a member of the Shoals United Methodist Church and a member of the Eastern Star. She is survived by one daughter; Lisa Holmes and husband Ronald of Flat Rock, IL, two sons; Donald Shaw II and wife Donna of Eaton, CO, Kent Shaw and wife Robin of Clarksville, TN; four grandchildren; Benjamin Shaw of Ft. Bragg, NC, Mark Shaw of Springfield, VA, Jason Randall of Radcliff, KY, Shannon Randall of Radcliff, KY; four great-grandchildren; Kylie Shaw, Aubrey Shaw, Gabrielle Shaw and Christopher Anschutz. Preceding her in death are her parents, husband and a brother, Jerry Fahr. Funeral Services will be 1:00PM Saturday at the Queen-Lee Chapel in Shoals with Pastor Marty Evans officiating. Visitation will be from 11:00AM until the time of the service. Memorial contributions may be made to the American Cancer Society.
To order memorial trees or send flowers to the family in memory of Linda Sue Shaw, please visit our flower store.