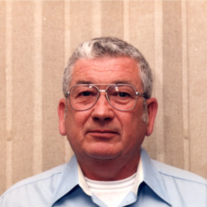 Lester Eugene Gammon, age 78, of Shoals, passed away on Sunday, January 10, 2016 at the University of Louisville Hospital following several weeks of injury from a burn. Born on December 17, 1937 in Martin County, Indiana, he was the son of the late Roman and Margaret Irene (Terrell) Gammon. He married Judy A. Tedrow on August 10, 1961 and she preceded him in death on July 20, 2000. Lester graduated from Shoals High School and proudly served his country in the United States Army. He retired as an explosive supervisor from NSWC Crane in 1993. He was a member of the Fraternal Order of Eagles Aeries #2442, V.F.W. Post #8559, and Shoals American Legion Post #61. Surviving are 3 daughters, Terri L. Gammon, Shelly Gammon Emmons and husband Chuck Emmons; and Pamela D. Gammon all of Shoals. 6 grandchildren, Brittany Erwin, Justin Emmons, Lindsey Emmons, Tracy Spurgeon, Jerad Emmons and Harley Gammon; 6 great-grandchildren; brother, Gerald Gammon of Shoals; sister, Margaret Campbell of Lexington, IN; brother-in-law, Larry Stroud of Shoals; and nieces and nephews. He is preceded in death by his parents; wife Judy; longtime companion, Marcella Russell; son, Lester E. Gammon Jr in infancy; one brother, Robert Gammon and one sister, Wilma Stroud.
To order memorial trees or send flowers to the family in memory of Lester Eugene Gammon, please visit our flower store.