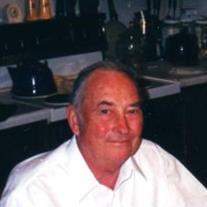 Larry Dee Albright, 84, of Shoals, Indiana, passed away unexpectedly on January 22, 2015 at 2:59 a.m. at Memorial Hospital and Healthcare in Jasper. Born on November 27, 1930 in Loogootee, Indiana, he was the son of Orville and Ruby (Grindstaff) Albright. He married his wife of 64 years, Mary Ellen Stewart on June 10, 1950 in Shoals, Indiana. Larry graduated with the Shoals High School Class of 1948, and then served his country in the United States Army. He owned and operated an insurance agency and was a realtor with RE/MAX. He was a civic minded individual, who spent many years in service to his community. He was most active as a volunteer of the Shoals Volunteer Fire Department, and held memberships in the Shoals Lions Club, Martin County Historical Society, and White River Masonic Lodge F. & A.M #332, formerly serving as Worshipful Master. A faithful and active member of the Shoals United Methodist Church, he served in many capacities of church leadership. He is survived by: Wife, Mary Ellen of Shoals 1 daughter, Connie and her husband John Clements of Virginia Beach, VA 2 sons, Doug and his wife Cathy Albright of Corydon Brad Albright and Lee Clark of San Diego, CA. Grandchildren, Whitney and husband Jon Muscutt, Allison and husband Brad Spine, Jill and husband Kwame James and Cassie Clements. 4 great-grandchildren, Amare James, Jasmine James, Brooklyn James and Nash Muscutt. Sister-in-Law, Dorothy Albright of Shoals Brother-In-Law and Sister-In-Law, Bill and Gerry Stewart of Shoals Preceded in death by his parents, and brother Gary Albright. Visitation will be from 4-8:00 p.m. on Monday, January 26, 2015 at the Queen-Lee Funeral Home in Shoals, and from 10:00 a.m. until the hour of service at 11:00 a.m. on Tuesday, January 27, 2015 at the Shoals United Methodist Church. A masonic service will be held at 7:30 p.m. on Monday. Burial will be in Spring Hill Cemetery. Shoals American Legion Post #61 will accord military graveside rites. Preferred memorials may be made to the Shoals United Methodist Church. Envelopes will be available at the funeral home or may be mailed to the Shoals United Methodist Church PO Box 27 Shoals, Indiana 47581.
To order memorial trees or send flowers to the family in memory of Larry Dee Albright, please visit our flower store.