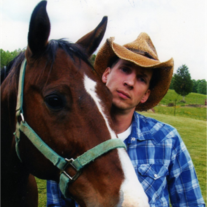 John Robert Brett age 35, of Shoals passed away at 12:18pm on Wednesday November 15, 2017 at St. Vincent Medical Service in Evansville. He was born on January 1, 1982 in Daviess County to Richard and Marsha (Wininger) Brett. He married Joni Foster on September 2, 2002 in Washington, Indiana. He attended Trinity Holiness Academy, was a member of Weisbach Community Church, the Shoals Park Board, was a past coach and past member of the Shoals Little League Board. He was employed at Crane as a boiler operator. Survivors include his wife, parents, one son, Dallas Brett; daughters Daisy, Willow and Heidi Brett; grandfather, John Wininger; one sister, Jill (Carl) Damon of Michigan and one brother Eric (Judith) Brett of Shoals. He was preceded in death by his grandparents, Robert and Blanche Brett and Clarabelle Wininger. Funeral services well be held at 2:00pm Sunday November 19, 2017 at the Shoals High School Gymnasium with Pastor John Zeigler officiating. Burial will be in the Hickory Ridge Cemetery. Visitation will be on Saturday from 2:00pm until 6:00pm at the Shoals High School Gymnasium and from 12:00pm until time of service Sunday. Memorial Contributions may be made to the Old National Bank in Shoals in care of the John Brett Family. The Queen-Lee Chapel of the Thorne-George Family Funeral Homes is in charge of the arrangements.
To order memorial trees or send flowers to the family in memory of John Robert Brett, please visit our flower store.