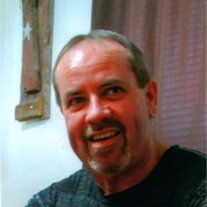 James D. Tharp, age 50, of Shoals, Indiana, passed away on Tuesday, March 15, 2016 at 5:59 p.m. at St. Mary’s Medical Center in Evansville. He was born on December 24, 1965 in Bedford, Indiana to the late Henry and Nannie (Spicer) Tharp. James married Misty M. McLain in Martin County, Indiana. He attended Shoals High School and was previously employed at Kroger and K-Mart in Bedford, and was an auto mechanic. James was of the Christian faith. He is survived by wife, Misty of Shoals; 1 daughter Cassie (Rusty) Steward of Evansville; 3 sons, James (Kaylee) Steward of Bedford; Matthew Steward of Evansville; Michael (Chelsea) Kirk of French Lick; 8 grandchildren, Cayden, Kaylee, Dalton, Hunter, Ellie, Zeke, Christian and Kyson; 7 sisters, Viola Cundiff of Alabama; Jean (Dan) McCarty of Shoals; Peggy (David) Fisher of Linton; Bonnie (Tim) Pottorff of Shoals; Connie (Bill) Pottorff of Shoals; Millie (Marty) Billiot of Arkansas; Clara (Darren) Bumbalough of Columbus; 2 brothers, Jr (Debbie) Tharp of Shoals; Ollie Tharp of Linton; numerous nieces, nephews, and friends. He is preceded in death by parents, and brothers Tom and Johnny Tharp. Visitation will be from 4:00-8:00 p.m. on Friday, March 18, 2016 at the Queen-Lee Funeral Home in Shoals and from 8:00 a.m. until the hour of service at 11:00 a.m. on Saturday at the funeral home. Burial will follow in Mt. Olive Cemetery in Williams. Pastor Brian Terry will officiate the service. Condolences may be made to the family at www.queenlee.com
To order memorial trees or send flowers to the family in memory of James D Tharp, please visit our flower store.