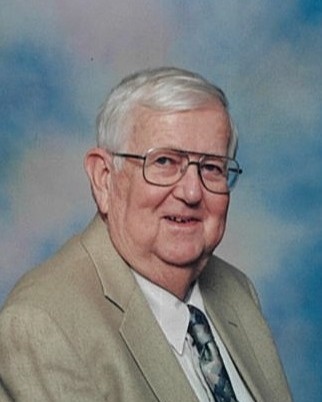 James Whitman Marshall age 82, of Shoals, passed away at 4:07 AM on September 28, 2022, at the Martin County Nursing Center in Loogootee.  He was born June 15, 1940, at the Daviess County Hospital in Washington, Indiana to James R. and Laura Y. Marshall.  He married Sara Jane Harding on February 10, 1963, at the Shoals Christian Church.

He was preceded in death by his parents, James and Laura Marshall; two sisters, Nancy Owens and Pat Ewing; one niece, Cheryl Owens; and one nephew, Russell Ewing.

Jim graduated from Shoals High School, Lain Technical Institute, and attended Indiana University.  He was employed by the city of Indianapolis for four years.  He retired in 1999 from Midwestern Engineers, Inc Loogootee after thirty-five years of employment.  He served in the U.S. Army/Corp of Engineers 577 Engineer Battalion.  He and his wife owned Marshall Motors and Marshall Rental Storage.  Along with Larry Garett, he developed and owned the Shoals Tailer Court.  Jim was a partner with several Shoals Citizens in owning the Shoals Café and a Shell Gas Station.  Jim’s keen interest in his community has led him to provide outstanding leadership in multiple organizations over his lifetime.

He was awarded the Carolyn Pratt Character and Leadership Award, the Gordon R. Bough Distinguished Service Award, was a Torch Bearer in the Indiana Bicentennial Celebration, and along with his wife was Grand Marshall of the 2011 Catfish Festival Parade, was presented the 2016 Philanthropist of the Year Award by the Martin County Community Foundation, and he and his wife received the 2018 Martin County Historical Society Award for Years of Service.

Jim, along with others, was instrumental in saving the Old Martin County Courthouse from the wrecking ball.  His father worked there for several years, and his grandfather practiced law there.

Jim’s life was a life well lived.  He truly loved Martin County and the river that ran through it.

Funeral services will be 12:00 PM Saturday at the Queen-Lee Chapel of George Funeral Care with Pastor Gary Norris officiating.  Burial will be in the Spring Hill Cemetery.  Visitation will be 10:00 AM until the service hour.

Memorial contributions may be made to the Martin County Historical Society.

The Queen-Lee Chapel of George Funeral Care has been entrusted with the arrangement.

To order memorial trees or send flowers to the family in memory of James "Jim" Whitman Marshall, please visit our flower store.