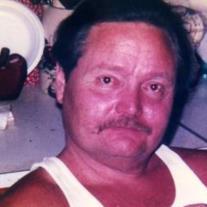 James Dean Bergman, 51, of Shoals, Indiana passed away at his residence on August 22, 2015 at 6:20 p.m. Born in Orange County, Indiana on February 24, 1964 he was the son of Roy K. and Karen (Newlin) Bergman. Jim attended Shoals Schools and was disabled. He is survived by his mother, Karen Bergman of Hillham; sister Lori West of French Lick; brother Roy Lee Bergman of Shoals; special nephew Josh Bergman of Shoals; and a very close friend Eldon Pursley of French Lick. He is preceded in death by his father and an infant brother Jeffrey Joe Bergman. The family will receive friends from 10:00 a.m. until noon on Saturday, August 29, 2015 at the Queen-Lee Funeral Home in Shoals. Burial will be made at a later date in Milltown Cemetery in Milltown, Indiana. Condolences may be made to the family at www.queenlee.com
To order memorial trees or send flowers to the family in memory of James Dean Bergman, please visit our flower store.