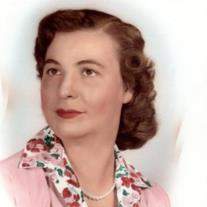 Ivil Gusty Woodruff, 83, of Cale, Indiana, formerly of Indianapolis, passed away August 19, 2015 at 4:33 p.m. at St. Vincent Hospital in Indianapolis. Born on September 19, 1931 in Grundy, Virginia she was the daughter of Floyd and Creddie (Ratliff) Looney. On February 8, 1964 she married Silas Woodruff and they were married 51 years at the time of his passing on January 2, 2013. Ivil was self-employed, owning/operating rental properties and was a homemaker. She was of the protestant faith. Survivors include her son Doug, and his wife Ellen Woodruff of Cale Daughter Joan, and her husband David Keith of Camby 2 brothers, Lonnie and Stuart Looney of Grundy, VA 2 sisters, Grethel Ryan of Tazwell, VA and Edna Stiltner of Grundy, VA 2 grandchildren Steven Woodruff and Carrie Keith both of Indianapolis 1 great grandchild Ivarie Keith of Indianapolis She is preceded in death by her parents, husband Silas Woodruff, brothers William, Melvin and Lee Looney and sisters, Ida Burks, Pearl Bowman and Ossie Looney and a sister in infancy. Visitation will be from 11:00 a.m. until the hour of service at 1:00 p.m. on Saturday, August 22, 2015 at the Queen-Lee Funeral Home in Shoals, and visitation will also be held at New Crown Cemetery Chapel on Monday, August 24, 2015 from 10:00 a.m. until 11:00 a.m. Burial will immediately follow.
To order memorial trees or send flowers to the family in memory of Ivil Gusty Woodruff, please visit our flower store.