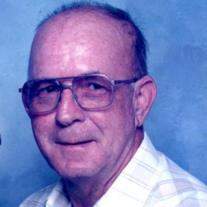 Herbert D. Sherfick, 86, of Shoals, Indiana passed away on Thursday, March 19, 2015 at 6:37 a.m. at the Daviess Community Hospital in Washington. Herb was born on February 11, 1929 in Lawrence County, Indiana to Frank and Mary Katherine (Fawcett) Sherfick. He married Wilma Klutts on February 28, 1953 in Paoli and she preceded him in death in July of 1958. He then married Deloris Doane on June 10, 1979 and she preceded him in death on December 16, 2005. He graduated from Shoals High School Class of 1948 and was valedictorian and president of his class. He was a proud veteran of the United States Army, serving with the 5th Armored Division and a Korean War Veteran. After 27 years of service he retired from Cummins Engine. Herbert held memberships with the Fraternal Order of Eagles Aeries #2442, Shoals VFW Post #8589, Shoals American Legion Post #61, and the International Brotherhood of Diesel Workers. He is survived by 1 daughter, Debra and husband Charles K. Guy of Loogootee; 1 son, Michael D. and wife Tami Sherfick of Shoals. 2 step-sons, Everett “Buster” Belcher and Larry Belcher both of Shoals; four grandchildren, Trevor, Nick, and Matt Guy and Jon Sherfick, and 3 great –grandchildren, and 2 sisters, Alice Wildman and Dorothy Bough both of Loogootee. He is preceded in death by his parents, first wife Wilma, second wife Deloris, one sister Mary Johnson and one brother Kenneth Sherfick. Visitation will be at the Queen-Lee Funeral Home from 2-6:00 p.m. on Sunday, March 22, 2015 and a funeral service will be held at 1:00 p.m. on Monday, March 23, 2015 at the funeral home. Burial will be made in Trinity Springs Cemetery.
To order memorial trees or send flowers to the family in memory of Herbert D Sherfick, please visit our flower store.