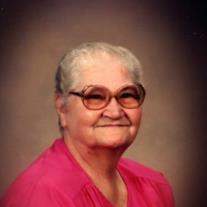 Helen Lucille Tharp, 91, of Shoals, passed away on Friday, September 25, 2015 at 11:30 p.m. at the Loogootee Nursing Center. Born on August 14, 1924 in Martin County, Indiana, she was the daughter of the late Ernest and Ella (Gilbert) Holt. She married Frank M. Tharp in Martin County, Indiana on September 10 1940 and he preceded her in death in 1988. Lucille was previously employed at the French Lick Sheraton and at the Shoals Bus Stop. She attended the Shoals Holiness Church. She is survived by: Son, Charles, and wife Lois Tharp of Shoals Daughters, Lois M. Fuartado Loogootee, Indiana and Beverly Gee of Shoals. 17 grandchildren, 52 great grandchildren and 29 great-great grandchildren. 1 sister Violet and husband Clinton Roberts of French Lick, Indiana She is preceded in death by her parents, husband, son James Darrell Tharp, 3 grandchildren, 2 great-great grandchildren, and sister Pauline Denny. Visitation will be from 4:00 – 8:00 p.m. on Monday, September 28, 2015 at the Queen-Lee Funeral Home in Shoals, and the funeral will be at 11:00 a.m. on Tuesday at the funeral home. Burial will follow in Spring Hill Cemetery. Condolences may be made on-line to the family at www.queenlee.com.
To order memorial trees or send flowers to the family in memory of Helen Lucille Tharp, please visit our flower store.