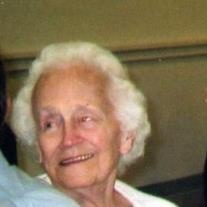 Helen F. Jones, 96, of Shoals, Indiana, passed away on January 6, 2015 at 11:12 a.m. at the Loogootee Nursing Center. She was born on March 8, 1918 in Chicago, Illinois to Joe and Josephine (Moske) Martin. She married Austin Jones in 1945 in Quincy, Illinois, and he preceded her in death in 1980. Helen was a homemaker. She enjoyed traveling, gardening, canning, and frying fish. She was a dedicated member of Kingdom Hall of Jehovah Witness in French Lick. She is survived by one son, James A. Jones, and wife Stephanie, of Shoals Grandchildren: Jamie Leidgen of Jasper Jason L. Jones of Shoals James Jones Jr of Jasper Jennifer Gibson of Jasper Courtney Neideffer of Shoals Jennifer Baxter of LaFayette 8 great grandchildren and 2 great-great grandchildren One brother, John Martin of Springfield, IL One sister, Caroline Thomas of Springfield, Il Preceded in death by her parents and one sister Marie Martin. Visitation will be from 11:00 a.m. until the hour of service at 1:00 p.m. on Thursday, January 8, 2015 at the Queen-Lee Funeral Home in Shoals. Burial will be made in Spring Hill Cemetery.
To order memorial trees or send flowers to the family in memory of Helen F Jones, please visit our flower store.