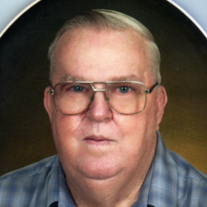 George “Tony” Sims age 82 of Shoals, passed away on Thursday July 27, 2017 at 2:07am at the Loogootee Healthcare and Rehabilitation Center. He was born on December 9, 1934 in Martin County to Jasper and Lillian (Sargent) Sims. He married Sue Pride on July 18, 1953 in Shoals and she survives. He graduated from Shoals High School, was a member of the Shoals Eagles, a former member of the Sons of the War Dads of Shoals American Legion Post 61 and a member of Saint Mary’s of the Immaculate Conception in Shoals. He was a retired heavy equipment operator. He is survived by his wife, two daughters, Penny (Greg) Gibbs of Anderson, South Carolina and Annette Taylor of Shoals; two sons, Gregory Sims and Tony Sims both of Shoals; a brother, Edward Sims of Shoals; a son-in-law, Roger Atkison of Franklin, Indiana; eight grandchildren, Tyler, Trey, Tanner and Travis Gibbs, Adam Atkison, Ryan Atkison, Seth Taylor and Ashley Taylor. He is preceded in death by his parents; a daughter, Debra Atkison and a son in infancy. A mass of Christian Burial will be held Monday August 7, 2017 at 11:00am at Saint Mary of the Immaculate Conception in Shoals. Father Kenneth Walker is officiating. Burial will be in the Spring Hill Cemetery. A reception of friends and family will be held one hour prior to the service at the church.
To order memorial trees or send flowers to the family in memory of George Tony Sims, please visit our flower store.