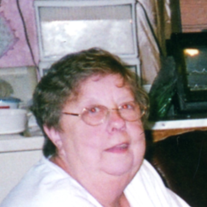 Frances Kay (Lee) Holt, 73, of Shoals, passed away on Saturday, March 26, 2016 at 4:00 a.m. at Monroe Hospital Bloomington. Born on October 21, 1942 in Martin County, Indiana to Harvey and Opal (Davisson) Lee. She married Ronald Vance Holt and he preceded her in death on March 29, 2008. She was a 1960 graduate of Shoals High School, a member of the Rusk Homemakers Club, Shoals Senior Citizens, and The Shoals Nazarene Church. Frances was a homemaker. She is survived by 1 son, Walter Holt of Shoals; 2 daughters Ludemia, and her husband, Clint Burgess of Loogootee; Ruth Hamilton of Bedford; 4 grandchildren, Mandy Burgess, Casey Burgess, Anthony Wayne Robinson II and Ronald Jack Cory Robinson; close cousins, Beverly Brown of Somerset, Kentucky; nephews, Jimmy Dean Holt of Shoals; Calvin Evans of Shoals; and Wayne Evans of Wellington, North Carolina. Visitation will be from 4:00-8:00 p.m. on Monday, March 28, 2016 at the Queen-Lee Funeral Home. Burial will be private in the Allbright Cemetery. Condolences may be made online to the family at www.queenlee.com
To order memorial trees or send flowers to the family in memory of Frances Kay (Lee) Holt, please visit our flower store.