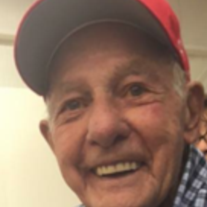 Everett “Junior” Atkison Jr. age 92 of Shoals, passed away at 11:27am on April 18, 2017 at the Deaconess Hospital in Evansville. He was born on March 25, 1925 to Everett and Gertrude (Lynch) Atkison. He married Delorma Wade on October 12, 1949 at the Shoals Church of Christ and she survives. They celebrated 67 years of marriage. He was a retired supervisor at US Gypsum in Shoals and a WWII Army Veteran. He attended the Washington Church of Christ and the West Shoals Church of Christ. He is survived by his wife, three sons, Greg (Brenda) Atkison of Henderson, Kentucky, Roger Atkison of Franklin and Warren Atkison of Shoals, and one sister Bonnie Elms of Orman Beach, Florida. Also surviving are five grand-children, Adam and wife Kristi, Andy and wife Karen, John and wife Tiffany, Ryan and Taylor. He is preceded in death by his parents, two sisters and one brother. Funeral services will be held at 12:00pm Saturday April 22, 2017 at the Queen-Lee Chapel of the Thorne-George Family Funeral Homes in Shoals with Christopher Wiles officiating. Burial will be in the Springhill Cemetery. Visitation will be from 4-8pm Friday and from 9:00am until service time on Saturday.
To order memorial trees or send flowers to the family in memory of Everett "Junior" Atkison, please visit our flower store.