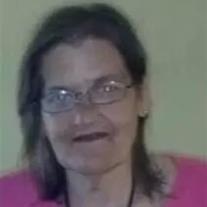 Eva G. Batman, 59, of Bedford, passed away at 8:40 A.M. on Thursday, December 11, 2014, at her residence. Born August 4, 1955, in Lawrence County, Indiana, she was the daughter of Charles and Virginia (Fountain) Batman. She graduated from BNL, Class of 1973. She attended Ivy Tech Nursing School. Surviving are her mother, Virginia Batman; two sisters, Cathy Clouse and Jane Pace; two brothers, Carl Batman and Chester (Linda) Batman; four nieces; five nephews; several great-nieces and nephews; several cousins; three aunts; and two uncles. She was preceded in death by her Father, Charles Batman; brother-in-law, David Clouse; and her grandparents. Funeral service will be on Tuesday, December 16, 2014, at 11:00 A.M. at Ferguson-Lee Funeral Home, with John Wisley officiating. Burial will be in Crawford Cemetery. Friends may call on Tuesday, 9-11 A.M. at the funeral home. In lieu of flowers, memorial contributions may be made to Ferguson-Lee Funeral Home.
To order memorial trees or send flowers to the family in memory of Eva Gail Batman, please visit our flower store.