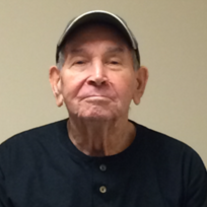 Elmer Cletus Tedrow, 84, of Shoals, passed away on Tuesday, October 27, 2015 at the Memorial Hospital and Healthcare Center in Jasper. Born on March 5, 1931 in Alfordsville, Indiana he was the son of the late Edgar and Dortha (Witt) Tedrow. Cletus was previously employed by Lindsey’s Ford Tractor Sales, Monon Railroad Company, and he retired from his greatest joy, woodworking. He was a lifelong Martin County dairy and grain farmer. He attended Martin County Schools and was a member of the Fraternal Order of Eagles #2442. He is survived by daughters Connie Benson of Salem; Cheryl and Tim Beyers of Shoals; Rick and Rhonda Tedrow of Dubois; Mark and Renee Tedrow of Shoals; Bob and Vicky Tedrow of Shoals; and Brian and Susan Tedrow of Shoals. 11 grandchildren and 14 great-grandchildren. 1 sister, Dorothy “Midge” Collins of Shoals. He is preceded in death by his parents, 2 sisters Eva Feller and Mary Montgomery; and brothers, Paul, Marion and Kenny Tedrow. Visitation will be held from 2:00 p.m. until 6:00 p.m. on Sunday, November 1, 2015 at the Queen-Lee Funeral Home in Shoals. The funeral will be held at 11:00 a.m. on Monday at the funeral home. Burial will follow in Pleasant Valley Cemetery. Condolences may be made to the family at www.queenlee.com
To order memorial trees or send flowers to the family in memory of Elmer Cletus Tedrow, please visit our flower store.