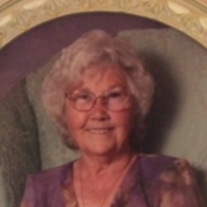 Eldean T. Gibbs, 89, formerly of Shoals, Indiana passed away in Anderson, SC on Wednesday, March 22, 2017. She lived with her son and daughter-in-law, Gregory D. and Penny Gibbs since December, 2014. Born in Huron, Indiana, on June 22, 1927, she was the daughter of Charles and Bertha (Owens) Terrell. She married Robert W. Gibbs on June 8, 1946 and he preceded her in death. She graduated from Shoals Community Schools and retired from NWSC Crane. She was a devoted wife, mother and grandmother. Survivors include her daughter, Luwanna K. Bollin (Kenneth) of Springfield, Illinois and son, Gregory D. Gibbs (Penny) of Anderson, SC; grandchildren, Kendra Bollin and Kristopher Bollin (Lara) all of Springfield, Illinois, and Tyler, Trey, Tanner (Katie) and Travis Gibbs all of Anderson, SC; and 4 great grandchildren. She is also survived by her sister, Lavonda Gutierrez of Freeport, Texas and brother Charles Terrell of Shoals, Indiana. Preceding her in death in addition to her husband and parents were sisters Helen Payne, Irene Gammon, Frances Sellers, Pauline Johnson, Dollie McCauley, Maxine Hopkins, Martha Blessinger, and brothers, Paul Terrell, Laverne Terrell and Frank Terrell. Friends may call from 11:00 AM to 1:00 PM Saturday, March 25 at the Queen Lee Chapel in Shoals. Services will be conducted at 1:00 PM following visitation at the funeral home. In lieu of flowers, memorials may be made to Pleasant Valley Cemetery, C/O Janet Qualkenbush,10220 Spout Springs Rd, Shoals, IN 47581 or to Hospice of the Upstate, 1835 Rogers Rd, Anderson SC 29621.
To order memorial trees or send flowers to the family in memory of Eldean T. Gibbs, please visit our flower store.