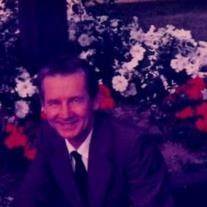 Reverend Edward (Eddie) Miller, 86, of Petersburg, Indiana, passed from this life to Eternal Life on Thursday, May 21, 2015 at 2:10 a.m. at the Golden Living Center in Petersburg. He was born in Flint Michigan, on July 20, 1928, to Amalia and Alexander Miller, descendants of the Volga River Germans. Edward graduated from Flint Michigan Northern High School in 1946, and later studied and received Certificate of Accreditation, Credentials for Ministerial Ordination by the Pilgrim Holiness Church Conference, and Accreditation Credentials, Ordained Elder in Good Standing in the Bible Holiness Church Connection in 2013. Also furthering education in theology, study of Greek, Edward completed courses from Bluefield College, Bluefield, West Virginia, and God's Bible School in Cincinnati, Ohio. Edward married Mary Louise Gossett on September 20, 1949 in St. Clair Shores Michigan. Edward, with an avid love for reading, included reading his precious Bible over 50 times in his lifetime, added to an ever growing library of many years, eventually donated the fine collection to a religious college, at retirement. As an accomplished musician, he played the clarinet in the Marching Band and Concert Band of Flint Northern High School, and the Church Band of the German Reform Church of Flint Michigan. Expanding from his great love of music, he progressed in musical talent eventually owning and playing eleven additional instruments. Also, Edward's great love for classical and religious music, and his studious lifelong discipline of reading, led him to invest his proficient talents, in 63 years of what he considered his most valuable work in life: Religious Pastoral, and Evangelistic Ministry as a dedicated team with his wife Mary in many states of the Eastern U.S. Edward is survived by his wife, Mary Louise, of Petersburg, Indiana, and 4 siblings: Kathryn Anibal, Emma Sack, Rueben and Annie Miller, all of Flint Michigan, and Esther Stuckert of Dallas Texas; also three Children: James Mark Miller, and his wife Marge, of Titusville, Fla., Eunice Ann Miller of Lexington, KY, and David Edward Miller, and his wife Kathy, of Pa, including ten immediate grandchildren, and numerous nieces and nephews. He is preceded in death by his parents, and brothers Alex Miller and John Miller, three brother-in-laws, John Anibal, Ben Stuckert, and Harold Sack, and one sister-in-law Jeanette Miller. A viewing will be held at Twin Oaks Church, Petersburg, IN, on Tuesday, May 26, 2015 from 11:00 a.m. until the hour of service at 2:00 p.m. Graveside rites will follow in the Twin Oaks Church Cemetery, located just north of Petersburg, Indiana, a 1/2 block east of SR57. 1911 East CR 650 North. Queen-Lee Funeral Home in Shoals, Indiana entrusted with the arrangements.
To order memorial trees or send flowers to the family in memory of Edward "Eddie" Miller, please visit our flower store.