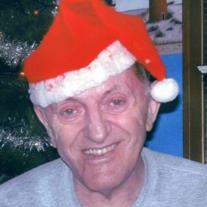 Donald Joseph Qualkenbush, 79, passed away at the Garden Villa in Bedford on August 7, 2015. Born in Martin County, Indiana on August 10, 1935, he was the son of Henderson and Mary (Blackwell) Qualkenbush. He is survived by one sister, Margie Lynch of Williams, Indiana, several nieces and nephews, and great- nieces and great-nephews. Preceding him in death were his parents, sisters Theresa Cox and Betty Abel; brothers Fred and Johnny Qualkenbush; nieces Carolyn Davis and Judy Cox; and nephews Phil and Gary Lynch. Donald loved music, model cars, eating any kind of chocolate and listening to the radio. Visitation will be from 3-7:00 p.m. on Monday, August 10, 2015 at the Queen-Lee Funeral Home in Shoals, and the funeral will be at 11:00 a.m. on Tuesday, August 11, 2015 at the funeral home. Burial will be made in Pleasant Valley Cemetery. Condolences may be made to the family at www.queenlee.com
To order memorial trees or send flowers to the family in memory of Donald Joseph Qualkenbush, please visit our flower store.