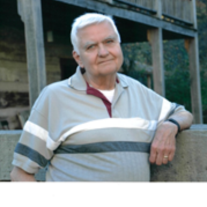 Dennis James Jones, 79, of Shoals, passed away unexpectedly on November 8, 2018 at 12:23 a.m. at the Daviess Community Hospital in Washington, Indiana. Born on September 25, 1939 in Loogootee, Indiana, he was the son of the late Carl and Lucille H. (Himsel) Jones. He married Linda G. Steele in December 5, 1991, and she survives. Dennis graduated from Loogootee High School in 1957. He was a professional engineer having earned a degree in Mechanical Engineering from Purdue University. After graduating, he worked for The Boeing Company in Huntsville, Alabama and in Dayton, Ohio where he helped test and develop the fuel tank for the Saturn V Rocket and the Lunar Rover for NASA’a moon missions. Returning to Indiana, he went to work for the Naval Weapons Support Center, Crane from which he retired in 2009. Dennis held two patents. In his retirement years, he enjoyed developing inventions, working in the garden and planting trees. He was an avid reader and car enthusiast, having owned in his younger years both a Corvette and a Porsche. He followed Purdue football and basketball with great enthusiasm. He and Linda have welcomed numerous dogs and cats into there home and have hosted unnumbered birds, squirrels, rabbits, deer and other wild creatures in their backyard. He was a member of The Church of Jesus Christ of Latter-Day Saints. Dennis is survived by his wife, Linda and her family, Gaye and Steve Sorrells of Montgomery, Indiana and their children as well as by numerous beloved cousins from the Himsel and Jones families. He will be so greatly missed. He is preceded in death by his parents. Funeral services will be held at 11:00 a.m. Tuesday, November 13, 2018 at the Queen-Lee Chapel in Shoals with Bishop Tracy Bailey officiating. Burial will be in the Spring Hill Cemetery in Shoals. Visitation will be 4-8 p.m. Monday at the Queen-Lee Chapel and 10:00 a.m. until the time of service Tuesday. The Queen-Lee Chapel of the Thorne-George Family Funeral Homes is in charge of the arrangements.
To order memorial trees or send flowers to the family in memory of Dennis James Jones, please visit our flower store.