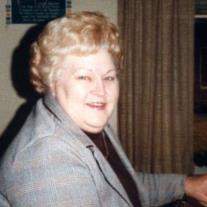 Delphia Doris (Sims) Heckard, 89, of Shoals, passed away on April 11, 2015 at 9: 15 p.m. at the Northwood Retirement Community in Jasper. Born on August 25, 1925 in Dover Hill, Indiana, she was the daughter of the late William Ivan and Blanche (Walton) Sims. She married William N. “Bill” Heckard on August 8, 1947 in Vincennes and he preceded her in death on September 21, 2003. Delphia attended Martin County Schools. She received her GED in 1972 and had the highest test score in the State of Indiana at that time. She then attended Indiana University, taking courses in accounting. Known to be a very industrious lady, who always worked hard and took great pride in her work outside and within the home, she was formerly employed as a secretary for Shorty Miller Tax Preparer, Miller’s Hat Shop in Shoals, Farm Bureau Insurance Agency, Red Gold Tomato Factory in Indianapolis, was a bus driver for the Shoals Community School Corporation, and managed the bookkeeping and accounting for Heckard’s Timber. She retired from the Indiana Department of Revenue after 21 years, retiring in 1990. A lover of music, dancing, and attending Broadway shows, she also enjoyed embroidering, cooking, canning, tending her rose garden, traveling and feeding her birds. Delphia collected and had a vast knowledge of antiques. She was especially proud that she and her husband were able to attend the inaugurations of Presidents Nixon and Reagan. As a child she attended the Dover Hill United Methodist Church and after marrying Bill they joined the Shoals United Methodist Church and raised their family within the Shoals congregation. Delphia held memberships in several organizations, including, Martin County Republican Women’s Club, Shoals Order of the Eastern Star, Daughters of the American Revolution, Shoals Hanson-McFee Post #61 American Legion Auxiliary, and Fraternal Order of Eagles #2442 Auxiliary. She is survived by her children, Norman W. (Sharon) Heckard of Bedford; William Malcolm “Bill” (Rita) Heckard of Bloomington; Grace D. (Ronald “Pete” ) Dunlap of Smithfield, Kentucky; Cathy L. (Calvin) Evans of Shoals, Ricky L. Heckard of Loogootee; and Darwin I. (Dianna) Heckard of Shoals. Grandchildren, Jeff W. Heckard of Newburgh; Brian S. Heckard of Bedford; William “Boomer” Heckard of Shoals; Casey L. Heckard of Bloomington; Travis R. Ashcraft of Bloomington; Kristine N. Midwood of Willimantic, CT; Stephanie L. Parsons of Louisville, KY; Amanda K. Heckard of Murfreesboro, TN; Heather D. Evans of Shoals; Lindsay R. Tolin of Indianapolis; Nathan S. Heckard of Bedford; and Alisha Truelove of Shoals. 25 great-grandchildren and 1 great-great grandchild. Preceded in death by her parents, husband Bill, two sisters Maxine Baker and Kizzie Walton, brother Jasper Sims, and a son in infancy. Visitation will be from 4-9:00 on Thursday, April 16, 2015 at the Queen-Lee Funeral Home in Shoals. The funeral will be Friday at 1:00 p.m. at the Shoals United Methodist Church, with viewing one hour prior to the service. Pastor Joseph Seger and Pastor Michael Schlaegel will be officiating the service. Burial will be in Spring Hill Cemetery in Shoals. On-line condolences may be made to the family at www.queenlee.com
To order memorial trees or send flowers to the family in memory of Delphia Doris (Sims) Heckard, please visit our flower store.