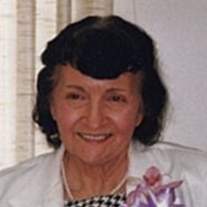 Deloris E. (Gaddis) Fettic, 86, formally of Shoals, passed away on January 11, 2018 at the Washington Nursing Center. She was born April 7, 1931 in Martin County to James B. and Ruby (Zollars) Gaddis. She married Don Fettic and he preceded her in death. She graduated Shoals High School, was employed at RCA in Bloomington and later as a research librarian at the Corydon Public Library. She was a member of the Shoals Christian Church. Survivors include a sister; Hazel Davis and husband Frank of Shoals and several nieces and nephews. Preceding her in death are her parents, husband, sisters; Nina Figg, Dorothy Gaddis, Beulah Gaddis, Dola Edington; and brothers; Roy Gaddis and Floyd Gaddis. Funeral services will be held Thursday, January 18, 2018 at the Shoals Christian Church with Bro. Matt Sullivan officiating. Burial will be in the Spring Hill Cemetery. Visitation will be from 12:00PM-2:00PM on Thursday at the church.
To order memorial trees or send flowers to the family in memory of Deloris E (Gaddis) Fettic, please visit our flower store.