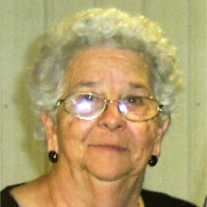 Deliliah “Dee” Jewell, 84, of Trinity Springs, passed away at the Memorial Hospital & Healthcare Center on Monday, August 8, 2016 at 5:05 p.m. She was the daughter of the late William Glen and Dulcie V. (Hornocker) Rusher, and her husband, John Jewell preceded her in death in 1992. Dee was a member of the Dover Hill United Methodist Church. She previously worked for RCA in Bloomington, Perfect Fit in Loogootee, and she also worked alongside her husband on the family farm. She is survived by daughters, Glenda, and husband, Scott Dickens of Shoals; Rebecca Jones of Loogootee; son, Michael, and wife, Teresa Jewell of Shoals, numerous grandchildren, great-grandchildren, nieces and nephews. She is also preceded in death by daughter Diane K. Uppencamp, sisters Ila Roberts, Simonetta Rollins and brother Wallace Murray. Graveside services will be held at 1:00 p.m. on Sunday, August 28, 2016 at the Mount Union Cemetery. Condolences may be made to the family at www.queenlee.com
To order memorial trees or send flowers to the family in memory of Deliliah "Dee" Jewell, please visit our flower store.