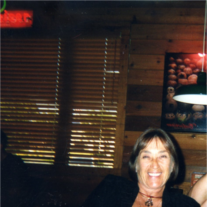 Debi Jean Albright Mardis, age 60, of Washington, left this earth to be with her Heavenly Father on Saturday, May 28, 2016 at 12:25 a.m. At her passing she was surrounded by her family who had supported and cared for her during her 15-month long battle with cancer. Born in Indianapolis, Indiana on July 21, 1955 she was the daughter of Clarence and Helen (Shaw) Albright. Her husband Rex Mardis preceded her in death in 2010. Debi graduated from Greenwood High School. She was a very industrious lady who worked as an E.M.T., held a realtor’s license, was well-known as a union painter and professional wall papering hanger. She loved horseback riding, fishing, canoeing, camping, traveling and was an avid Harley rider. One of her greatest joys was rescuing and loving Boxer dogs. She is survived by her mother, Helen May Moore of Washington; son, Seth Adam Sanders of Washington; daughter, Dawn Albright Wade of Washington; 2 granddaughters, Kayla (John) Coulter and Taylor Danielle Smith, 1 grandson, Daylan Albright, 2 brothers, Dallas Albright and Stan Clifton both of Washington; 1 sister, Dorothy Harder of Brown County; and several nieces, nephews, and cousins. She is preceded in death by her father Clarence Albright, and 3 brothers, Floyd, Fred and Donald Clifton. Debi’s wishes were honored and she will be cremated. The family will receive friends from 10:00 a.m. until the hour of service at 1:00 p.m. on Friday, June 17, 2016 at the Antioch Christian Church in Washington. Pastor Keith Meece will officiate the service. Queen-Lee Funeral Home in Shoals entrusted with the final arrangements, and condolences may be made to the family at www.queenlee.com
To order memorial trees or send flowers to the family in memory of Debi Jean Albright Mardis, please visit our flower store.