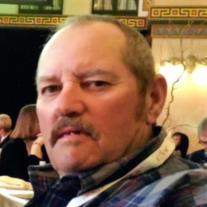 David C. Probasco, 66, of Shoals, passed away on Monday April 13, 2015 at 5:57 a.m. at Cathedral Healthcare Center in Jasper. Born on August 7, 1948 in Shoals, Indiana, he was the son of Luther and Margaret (Butler) Probasco. He married Debra J. Johnson on May 8, 1989 in Daviess County, Indiana. He was employed for 44 years at the French Lick Springs Resort in golf course maintenance. He loved his job and was well known for his designs when he mowed the rough’s for the golf course. David attended Martin County Schools and was of the Christian faith. He is survived by his wife Debra of Shoals; one daughter Tonya Probasco of Shoals; three sisters, Loretta Jent of Oolitic; Marilyn Mills of French Lick; and Wanda Probasco and Gene Merchand of Dubois; one brother, Arthur Probasco of Shoals. Preceded in death by his parents; sister Violet Way; and a twin brother Dennis Probasco. Visitation will be from 4:00-8:00 p.m. on Wednesday, April 15, 2015 at the Queen-Lee Funeral Home in Shoals. There will be no funeral service and cremation will follow. Burial will follow at the Butler Cemetery at a later date. On-line condolences may be made to the family at www.queenlee.com
To order memorial trees or send flowers to the family in memory of David C Probasco, please visit our flower store.