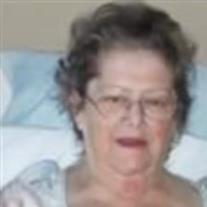 Clara Rose (Weisheit) Holt, 71, of Loogootee, passed away peacefully on Wednesday, January 21, 2015 at the Eastgate Manor Rehabilitation and Nursing Center in Washington. Born on January 7, 1944 in Martin County, Indiana, she was the daughter of Karlie J. and Catherine (Arvin) Weisheit. She married Lawrence Holt and he preceded her in death in 2009. A homemaker, she graduated from St. John’s High School Class of 1961. Clara attended the Natchez Community Church. She is survived by one son, Karlie and wife Heather Holt of Orleans. Three grandchildren, Addyson Holt, Mason Holt and Hudson Holt. 4 step children, 8 step grandchildren, and 9 step great-grandchildren. Two sisters, Alice Jones and husband Marlo Chilman of Washington Carolyn Wagler of Loogootee One brother Paul and wife Alice Weisheit of Loogootee She is preceded in death by her parents, Karlie J. and Catherine Weisheit, her husband, Lawrence Holt, one sister Maita Wininger, one brother, Robert Weisheit and brother-in-law, Adrian Wagler. Visitation will be Saturday, January 24, 2015 from 4:00-8:00 p.m. at the Queen-Lee Funeral Home in Shoals, and the funeral will be on Sunday at 1:00 p.m. at the funeral home. Burial will be in Spring Hill Cemetery. Bro. Wayne Pendley will officiate the service. Condolences may be made on-line to the family at www.queenlee.com
To order memorial trees or send flowers to the family in memory of Clara Rose (Weheisit) Holt, please visit our flower store.