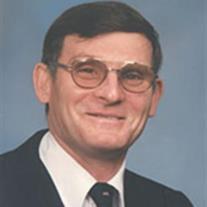 Charles J. Payne, 76, of Washington, Indiana, passed away at 8:10 P.M. on Monday, December 29, 2014 at his residence. Born November 22, 1938 in Shoals, Indiana, he was the son of Claude and Ruby (Waggoner) Payne. He married Linda Kay Wagoner on August 28, 1970; and she survives. He retired from U.S. Gypsum, where he worked as a truck driver and ran the powder wagon. He was a member of the National Guard. He was a member of the Shoals Nazarene Church. Surviving are his wife, Linda Kay (Wagoner) Payne, of Washington, IN; daughter, Charlene Underhill, Washington, IN; step-daughter, Pamela Belmore, Fishers, IN; step-sons, Mark Wininger and Kevin Wininger, of Shoals, IN; son, George Payne, Loogootee, IN; sister, Dora (Fred) Pennington, Shoals, IN; brother, Leonard (Betty) Payne; twelve grandchildren; and twelve great-grandchildren. He was preceded in death by his parents; son, Charles R. Payne; five brothers, Henry, Carl, Norman, William, and George William; four sisters, Helen Hart, Deloris Melson, Mae Payne and Sue Marques; and one great-grandchild Rolen Wilson. Funeral service will be at 11:00 A.M. on Saturday, January 3, 2015 at Queen-Lee Funeral Home, with Pastor James Downs and Pastor Kevin Quinn officiating. Burial will be in Spring Hill Cemetery. Friends may call on Friday, January 2, 2015, 4-8 P.M. at the funeral home.
To order memorial trees or send flowers to the family in memory of Charles J Payne, please visit our flower store.