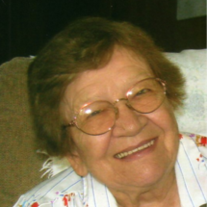 Catherine Winkler, 93, of Shoals, passed away on April 11, 2016 at 7:20 a.m. at the Loogootee Nursing Center. Catherine was born on February 2, 1923 in Shoals, Indiana to Elmer and Rachel (Crites) Howell. She married Lester L. Winkler on October 11, 1969 in Spencer, Indiana and he preceded her in death in 1993. Catherine graduated from Shoals High School Class of 1941. She retired from RCA Bloomington, Indiana where she worked on the assembly line for many years. Catherine was a founding and faithful member of the Spencer Wesleyan Church. In later years, upon her return to her hometown, she attended the Shoals Baptist Church. She is survived by 1 son, Tex Howell of Shoals; 2 daughters, Robin, and husband Bradley, Secrest of Bloomfield and Vicki Mills of Goshen; step-daughter, Joyce Thornton of Spencer; 5 grandchildren; Cassie Axsom, Nick Howell, Cole Howell, Andrea Nine, and Carly Secrest; 7 great-grandchildren; 1 great-great grandchild; 2 sisters, Lydia Braun of Shoals and Dorothy Grove of Bloomington; and brother, Richard T. Howell of Shoals. She is preceded in death by her husband Lester L. Winkler, parents Elmer and Rachel Howell, 3 brothers, Gordon Howell, Roy Howell and Ellis Howell, sister Alma in infancy, step-son, Ted Winkler and step-granddaughter, Robin Curry. Visitation will be from 4-8:00 p.m. on Wednesday, April 13, 2016 at the Queen-Lee Funeral Home in Shoals. The funeral service will be on Thursday, April 14, 2016 at 11:00 a.m. at the funeral home. Burial will be in the Pleasant Valley Cemetery. Condolences may be made on-line to the family at www.queenlee.com
To order memorial trees or send flowers to the family in memory of Catherine Winkler, please visit our flower store.