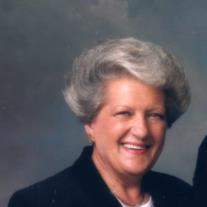 Carolyn Evelyn (Harder) Sims, 77, of Loogootee, Indiana passed away on Saturday, March 28, 2015 at 10:00 a.m. at Loogootee Healthcare and Rehabilitation Center. She was born on July 13, 1937 in Shoals, Indiana to Theodore H. and Mary Hazel (Dunlap) Harder. She married Hiram G. Sims on September 28, 1957 at the Hindostan United Methodist Church and he preceded her in death on September 15, 2009. Carolyn was a graduate of Shoals High School Class of 1955. She retired as produce manager from Loogootee Buehler’s and was formerly a bus driver for the Loogootee Community School Corporation. She is survived by daughters, Lu Ann (David) Dye, of Shoals; Beth Brown of Rising Sun; Donna (Chris) Beckman of Forsyth, IL; and Marsha (Tim) Lynch of Jasper. Grandchildren, Zachary (Veronica) Brown of Ellettsville, Ashley (Mike) Stanton, of Versailles; Katie, Caroline, and Curt Beckman of Forsyth, IL; Lindsay Beth (Todd) Bender of Hillsboro, OH; Cody and Alyssa Lynch of Jasper. Great-grandchildren, Eli Turner, Macie Kilburn, Mikey and Ryan Stanton all of Versailles; Dylan and Tyler Bender of Hillsboro, OH, and Esme` Brown of Ellettsville. One brother Neal W. Harder of Bargersville. She is preceded in death by her husband Hiram, parents, one brother Ted (Sonny) Harder and sisters, Janet Farrell, Helen Louise Harder and Donna Sue Harder. Friends may call on Saturday, April 4, 2015 from 11:00 a.m. until the hour of service at 2:00 p.m. at the Queen-Lee Funeral Home in Shoals. Pastor Joseph Seger will officiate the service. Carolyn will be laid to rest in Goodwill Cemetery. Preferred memorials are to the Goodwill Cemetery Association. Envelopes will be available at the funeral home.
To order memorial trees or send flowers to the family in memory of Carolyn Evelyn (Harder) Sims, please visit our flower store.