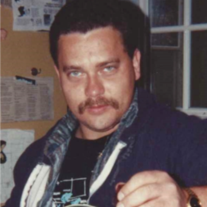 Bryan “Scott” Melvin age 55, of Shoals, passed away at his residence at 1:00a.m. on March 22, 2018. He was born on July 24, 1962 in Washington, to Robert Eugene Melvin and Lois June (Taylor) Conklin. He married Misty Cundiff and she survives. He attended Shoals Community Schools, previously worked at Crane CAAA, US Gypsum and Kimball International. He attended Dover Hill Christian Union Church, especially the Bible Study, and enjoyed playing his guitar and singing in church. He is survived by his wife, Misty Melvin of Shoals; his mother, Lois Conklin and husband Robert “Doc” of Loogootee; one son, Brandon Scott Melvin of Shoals; a brother, Robert Mark Conklin and wife Maria of Borden; sisters, Lynn Renee Fish and husband Mark of Bedford and Melissa Ann Conklin of Loogootee; two nieces Lexi Murray and husband James; Brandi Rosembaum and husband Robert; and one nephew, Liam Melvin and wife Krystal. He is preceded in death by his father and one brother, Randall Eugene Melvin. Visitation will be held at the Dover Hill Christian Church at 11:00am Tuesday, March 27, 2018. A funeral service will be at the church at 1:00pm. No graveside services will be held at this time. The Queen-Lee Chapel of the Thorne-George Family Funeral Homes in Shoals is in charge of the arrangements.
To order memorial trees or send flowers to the family in memory of Bryan "Scott" Melvin, please visit our flower store.