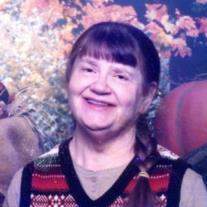 Barbara Ann Adams, 74, of Loogootee, Indiana passed away on Saturday, July 18, 2015 at her residence. Born on December 21, 1940 in Logansport, Indiana she was the daughter of the late Malcolm and Ellen Jane (Jones) Mackey. Barbara graduated from Fremont Ross High School in Fremont, Ohio and received an Associate’s Degree in criminology from Terra Technical College in Fremont. She was a homemaker and attended St. John’s Lutheran Church in Loogootee. She is survived by her children: Dr. Paul Eugene and Cheryl Adams of Hays, Kansas Bryan Douglas and Julinda Adams of Loogootee, Indiana Michael Dean and Victoria Adams of Plainfield, Illinois Grandchildren, David, Megan, Erin, Eric, Ross, Alex, Nathan, Arianna and Zane Adams 2 great-grandchildren, Felicity and Eva Adams 2 brothers, Lew Mackey of Winona Lake, Indiana and Robert Mackey of Whitehouse, Ohio Preceded in death by her parents, and brother Malcolm Jay Mackey. Visitation will be from 4-8:00 p.m. on Thursday, July 23, 2015 at the Queen-Lee Funeral Home in Shoals and from 10:00 a.m. on Friday, July 24, 2015 until the hour of service at 11:00 a.m. at St. John’s Lutheran Church in Loogootee. She will be laid to rest in Spring Hill Cemetery. Condolences may be made on-line to the family at www.queenlee.com
To order memorial trees or send flowers to the family in memory of Barbara Ann Adams, please visit our flower store.